Each tea bowls are individually hand built, varies in texture and pattern with different combinations of glaze and impression of hand-made stamps. 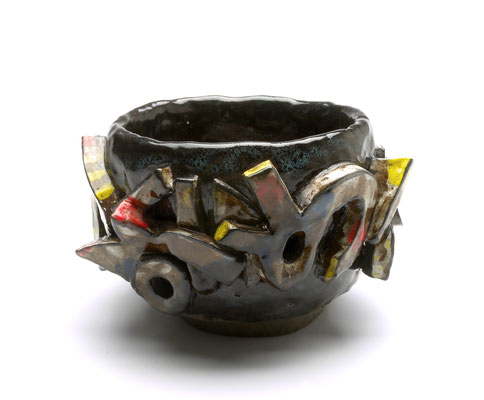 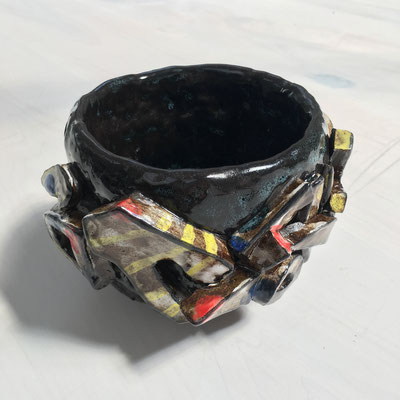 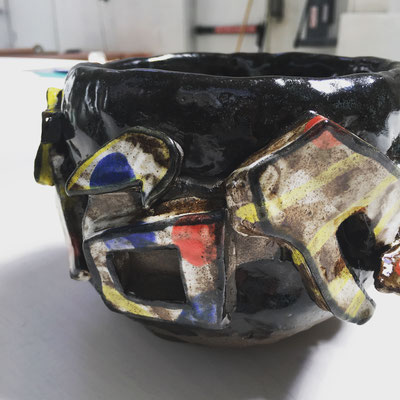 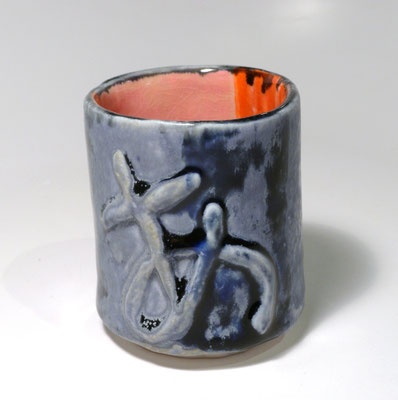 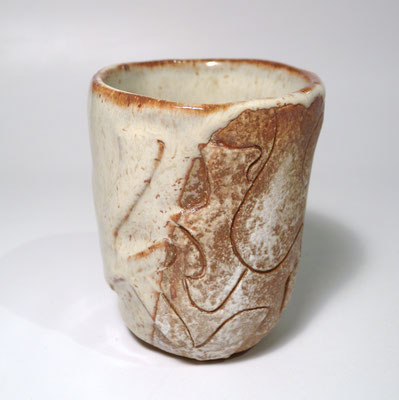 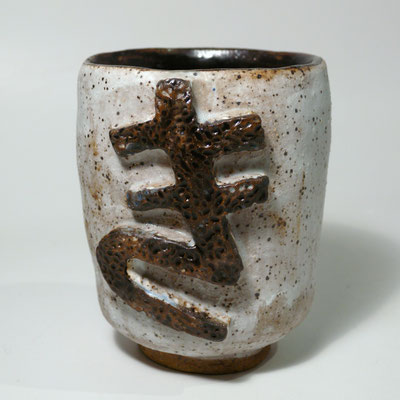 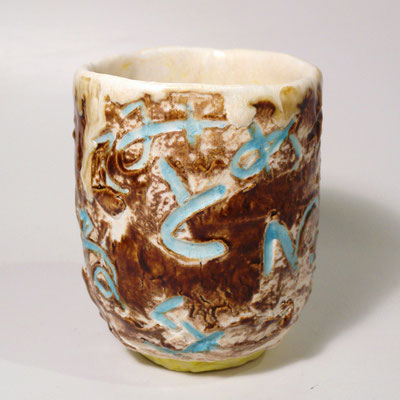 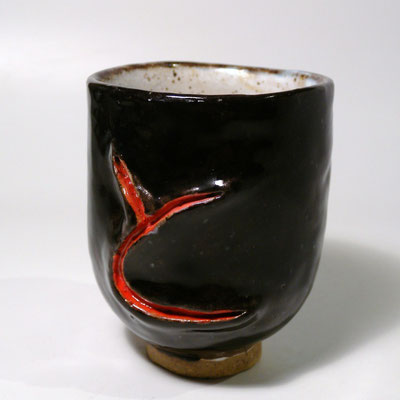 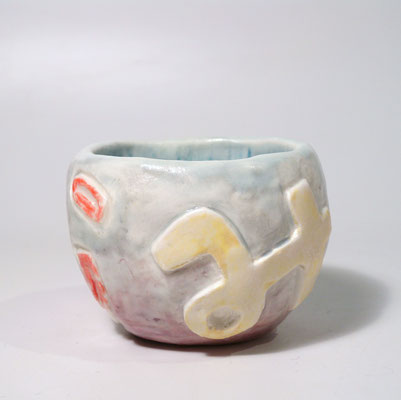 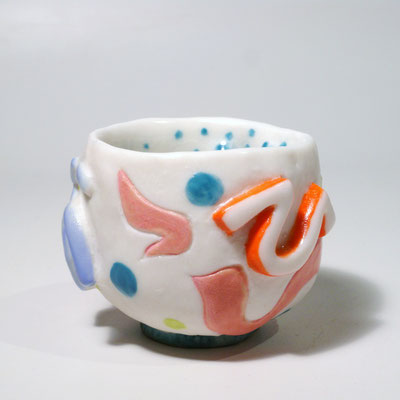 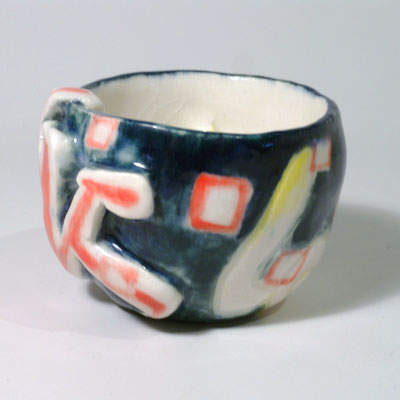 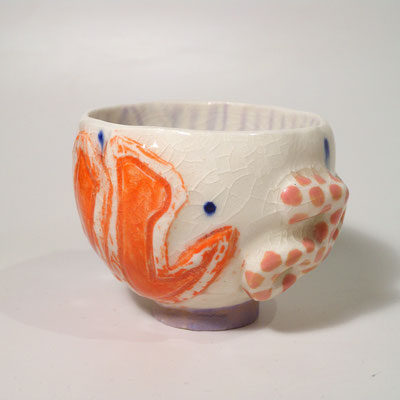 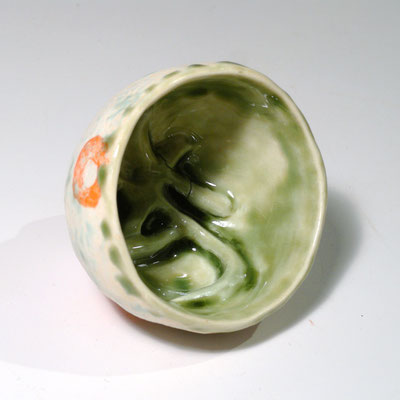 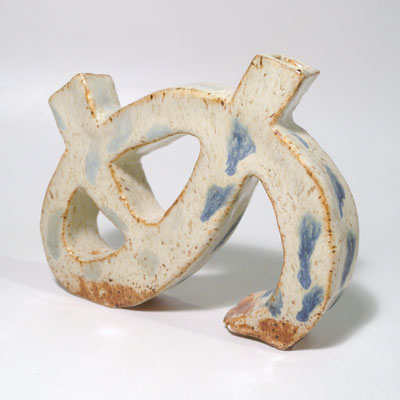 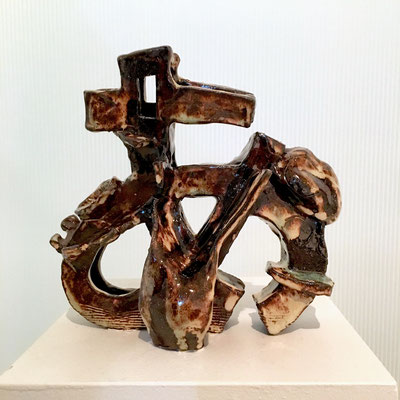 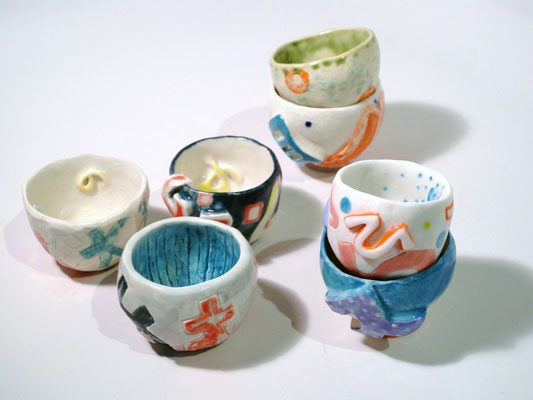 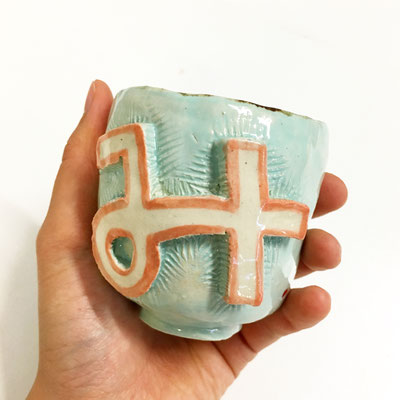 Working with ceramics as a Japanese artist is actually heavily loaded with its long renown history of crafts and tradition.

As a sculpture student in Japan and loved working with clay- yet I never believed that I would be able to become a ceramicist- for it's a male dominated world and harsh judgement depending on schools and family of orientation.

After coming to U.S., recognizing my identity through non-Japanese contexts, I realized that the problems I dealt with in Japan (with traditional rules and marginalized society)  had deep connections to subliminal hierarchies created in human history - constructed by capitalism and power.

DNA Chawan (tea bowl) is my statement of being and a criticism against American contemporary art through responding to 2 artworks.

When I encountered Tom Sach's NASA Chawan, I was not sure about how to feel about it. I feel this pressure - 'you have to appreciate this!' for it being introduced by my teacher in Ohio.

"Should I be appreciating this as in a funny, jokey way?" “How should I look at it as a Japanese person though?"

With its perfect form as a tea bowl, with a logo of NASA on it - to me, a patriotic symbol of American Dream - seemed to take away the whole concept of Japanese tea ceremony and boldly repainted into American (pop, capitalistic and disastrously industrial, and white) culture, snatching away the idea of Wabi-sabi completely, appropriated into a Western perspective; in short term, whitewashed.

I could not accept such perspective in taking over the beautiful concept of tea ceremony - full of spirit in nature - towards human oppression, even polluting the nature of earth.

While listening to Kendrick Lamar's song DNA, I kept feeling the sorrow and agony of holding this repeated DNA that has negativity - the dark side of our history. But Kendrick sings about this DNA in his music form - singing about life and dignity, living strongly with his black identity. I find it very close to the concept of Wabi-Sabi in his perspective. Every part of our history shares in this DNA and we still fight and conflict with each other - sometimes brutally but the life has to go on. Responding to this inspiration, I wanted to make a tea bowl as a combined symbol of us. Not only Japanese but many other people from all over the world has gone through oppression in certain forms and it is a courageous thing to face it and fight it. I was envisioned this DNA Chawan to respect Kendrick's song and black history of fighting against their oppression caused by one of the most difficult situations in human history.

We cannot change history but we can remember what happened with what we create. It is my step for acknowledging what is right and what is wrong, what to be continued and what to be ended. This is a meaningful time to work with ceramics and present ourselves to our future. This is me and this is us. I offer this DNA Chawan to sing along with Kendrick, protest against disfunction of human society and praise our connection to nature of earth.

I got hustle though, ambition, flow, inside my DNA

Tell me when destruction gonna be my fate Gonna be your fate, gonna be our faith Peace to the world, let it rotate Sex, money, murder—our DNA." 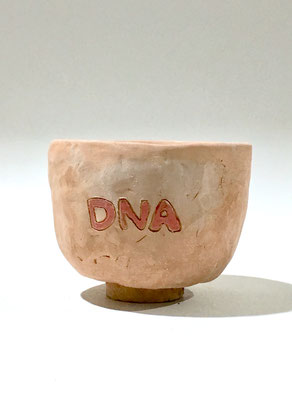 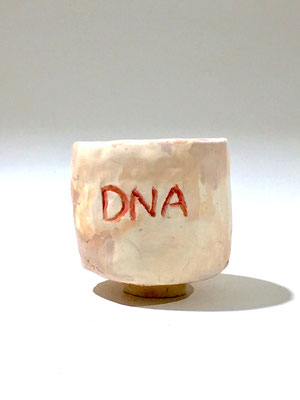 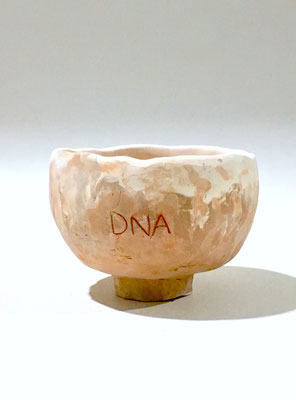 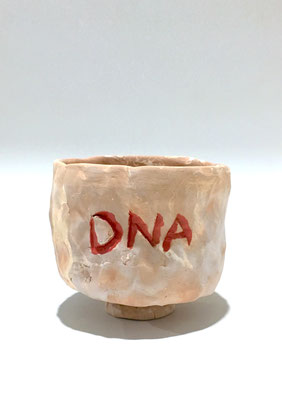 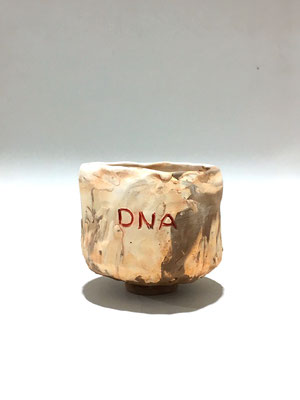 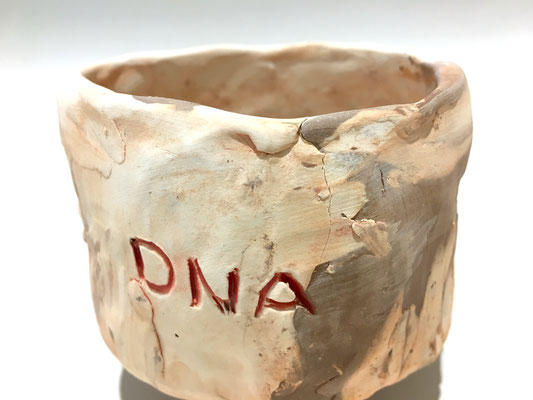 *Copy or the use of all the artworks and images of artworks to be, or part of prop to promote/advertise for other unrelated commodity or service sales without consultation to the artist is prohibited.